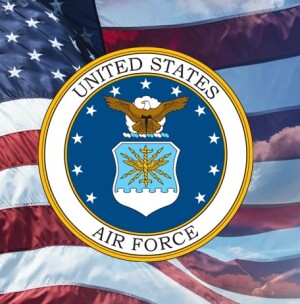 George was born the youngest of seven children in Washington, DC on January 14, 1929, to Roger & Sterling Marsden. He graduated with a BA in Fine Arts from Syracuse University in 1951. During freshman orientation he met his future bride, Betty Randall. It was love at first sight – they married in 1952. That same year George joined the US Air Force where he served in the Air Research and Development Command during the Korean war. His talents were used by the Air Force in several secret programs.

After four years in the Air Force, he directed the Medical Arts Department at NIH in Bethesda, MD. In 1961 he opened his own technical design business in DC.  There he created exhibits for the National Guard, the Population Clock for the US Census Bureau, and Ancient Rocketry models for the Air and Space Museum, to name a few. He retired in 1994.

George enjoyed a lifelong interest in all things aeronautical. He obtained his pilot’s license and spent many hours designing and producing model airplane kits for sale worldwide. He was active in the St. Andrews Society of Washington DC, the Exchange Club of Washington and the Presbyterian Church in Chevy Chase and Morehead City.

He is predeceased by his wife of 67 years, Betty Marsden, and is survived by his children; Dean Randall Marsden, Kathryn Marsden Leary, Robert Allan Marsden, his two grandchildren; Ryan Marsden Leary, Ellen Taylor Leary and his great-grandson; Max Noble Leary.

Condolences and life tributes may be sent to the family at www.noebrooks.net.

To send flowers to the family or plant a tree in memory of George Peterson Marsden, please visit our floral store.

You can still show your support by sending flowers directly to the family, or by planting a memorial tree in the memory of George Peterson Marsden
Share a memory
© 2022 Noe-Brooks Funeral Home and Crematory. All Rights Reserved. Funeral Home website by CFS & TA | Terms of Use | Privacy Policy | Accessibility